Complicity, or aiding and abetting, has attracted a great deal of attention of late in the practice of international criminal justice, theoretical literature on the topic and within the blogosphere. Unfortunately, several younger scholars who have written excellent books on the topic haven’t had the opportunity to weigh in, so I wanted to give them an opportunity to advertise their great work and take part in the respectfully critical enterprise I am initiating here.

I also wanted to use this opportunity to raise a question that has not attracted much attention elsewhere, namely, how do we interpret the reference to “purpose” in the ICC Statute’s definition of aiding and abetting? In that regard, I recently stumbled over the fact that I and, I suspect, many others in ICL have misinterpreted the provision, but I wanted to put that idea to scholars with real expertise on these issues. Thus, I have invited the following three authors to respond to the question I set out further below:

Dr Flavio Noto – Under the direction of Hans Vest and others, Flavio authored an excellent thesis entitled Secondary Liability in International Criminal Law: A Study on Aiding and Abetting or Otherwise Assisting the Commission of International Crimes (DIKE, 2013). 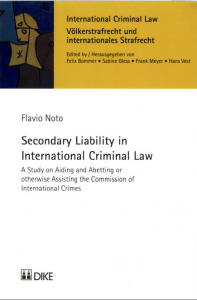 Dr Sarah Finnin – Sarah wrote a fantastic book for her doctoral thesis entitled Elements of Accessorial Modes of Liability: Article 25(3)(b) and (e) of the Rome Statute of the International Criminal Court (Martinus Nijhoff, 2012). She is presently an Associate Legal Officer at the ICTY; 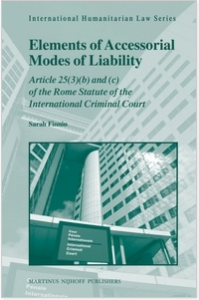 Dr Cassandra Steer – Cassandra is about to publish a great book entitled Translating Guilt: Identifying Leadership Liability for Mass Atrocity (T.M.C Asser Press, 2015). She is a Lecturer and Researcher at the Amsterdam Centre for International Law, but about to join McGill. 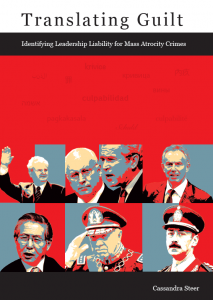 “In accordance with this Statute, a person shall be criminally responsible and liable for punishment for a crime within the jurisdiction of the Court if that person:…  (c) For the purpose of facilitating the commission of such a crime, aids, abets or otherwise assists in its commission or its attempted commission, including providing the means for its commission”

The received wisdom is that the reference to purpose requires a volitional commitment to the consummated offense, which makes the ICC standard higher than the position of knowledge in other international tribunals. In previous work, I have assumed as much, but I recently discovered that this is at least incomplete and potentially incorrect.

In a recent article I authored for Markus Dubber and Tatjana Hörnle’s Oxford Handbook of Criminal Law, which I creatively titled Complicity, I set out in greater detail why I suspect that the received wisdom about purpose in the ICC Statute might be misguided. To summarize (see pages 21 – 25 of the article), these reasons include:

US Federal Criminal Law – In a recent US Supreme Court decision, the majority held that “for purposes of aiding and abetting law, a person who actively partici­pates in a criminal scheme knowing its extent and charac­ter intends that scheme’s commission.” Rosemond v. United States, 134 S. Ct. 1240, 1243 (2014) (emphasis added);

US State Law – In a very helpful recent doctrinal survey of state law in the United States, John Decker reports that only three (3) states within the United States have purpose standards for aiding and abetting that require a volitional commitment to the criminal outcome. See John F. Decker, The Mental State Requirement for Accomplice Liability in American Criminal Law, 60 S. C. L. Rev. 237 (2008).

Israel – also a “purpose” jurisdiction, but the leading case stipulates that “where the aider only foresees the possibility of the commission of the principal offense, the aider may be convicted if it is his or her desire that should the offense actually be committed, his or her act will facilitate its commission.” Itzhak Kugler, Israel, in The Handbook of Comparative Criminal Law 352, 370 (Kevin Jon Heller & Markus Dubber eds.) (citing the Israeli Supreme Court case of CA. 320/99 Plonit v. State of Israel 55(3) PD 22 [1999];

Canada – although the criminal code stipulates purpose as the required mental element for complicity, the leading case on the proposition states that “Parliament’s use of the term ‘purpose’ in s. 21(1)(b) should not be seen as incorporating the notion of ‘desire’ into the mental state for party liability, and that the word should instead be understood as being essentially synonymous with ‘intention’”. R v. Hibbert [1995] 2 S.C.R. 973.

New Zealand – § 66(1) of the Crimes Act 1961 states that “[e]very one is a part to and guilt of an offence who… (b) does or omits an act for the purpose of aiding any person to commit the offence” (emphasis added), but the Supreme Court interprets this in the following terms: “A party will be liable as an aider and abettor only if he or she had knowledge of the essential matters constituting the offence.” Mahana Makarini Edmonds v. R. [2011] NZSC 159, para. 25 (emphasis added)

Given this history, I welcome critical engagement with the idea that the ICC standard for aiding and abetting should not be interpreted as requiring a volitional commitment to the criminal outcome. If so, what does purpose mean?